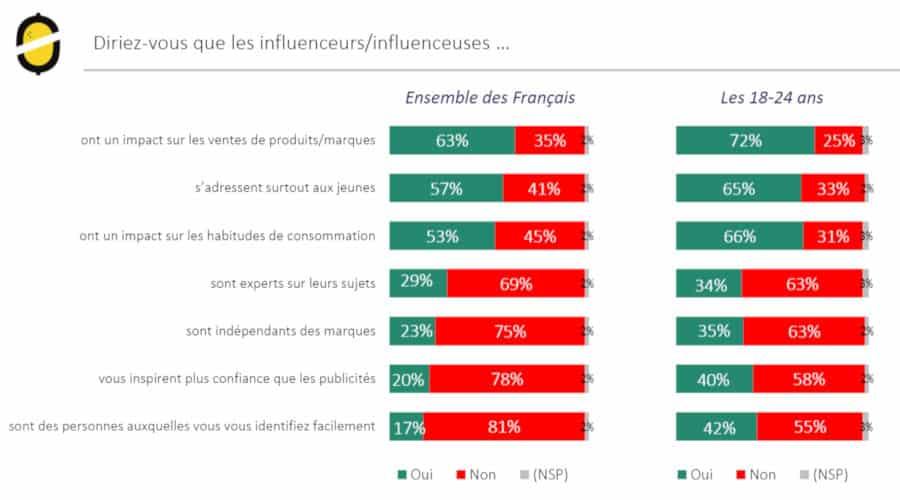 Studies on influencers follow each other and are not alike. Faced with the Bazaarvoice study published this summer which buried influencers and favored the opinions of real customers of a brand, a new study published on Tuesday by Odoxa and Emakina, shows on the contrary that influencers have an impact on the behavior consumers and are considered credible in some cases.

Authenticity greater than the number of fans

The new study recognizes the limits of the independence of influencers, which is their Achilles heel, which was already heavily pointed out by the Bazaarvoice study. The Emakina agency therefore recommends using authentic influencers and not selected solely according to their audience.

The Observatory of consumer behavior produced by Odoxa and Emakina presents the importance of the impact of influencers on consumers, mainly young people aged 18 to 24. For the study, influencers introduce a product, have an influence on the purchase, recommendation or, on the contrary, the abandonment of a product.

There is a generational boundary between two worlds according to Emakina. Younger people identify with influencers and are more likely to follow their recommendations and adopt their behaviors. This generation no longer frequents the old media, trusts people who look like them, whose lives they think are similar to theirs and who are almost part of their daily lives.

Consumers, however, distinguish muses from influencers. Young people consider that muses are in a mercantile and utilitarian relationship with the brand to which they are selling. Influencers are then perceived as more credible because they are not exclusively engaged with companies.

Still, if 40% of 18-24 year olds consider that influencers are more credible than advertising, they are not fooled by their supposed independence. “Yes to influencers, no to any influencer” is the message conveyed by Emakina through this study.

In terms of lines of action for brands, the choice of influencers is therefore crucial. They must identify those who will be authentic rather than betting everything on their audience.

For the Emakina agency, the influencer must be an integral part of the media mix and this in a long-term relationship because the perception of his message by his audience depends directly on the quality of his relationship with the brand. Finally, to guarantee credibility, brands must learn to work with influencers, which requires a logic of mutual discovery, a co-construction of the relationship.

Still, this co-construction described by Emakina does not exist without calling into question the independence of the influencer. Brands will have to go under the caudine forks of the influencer if they absolutely want to work with him and he retains his authenticity. There are not 2 drivers in a car since there is only one steering wheel.

Key information on this subject